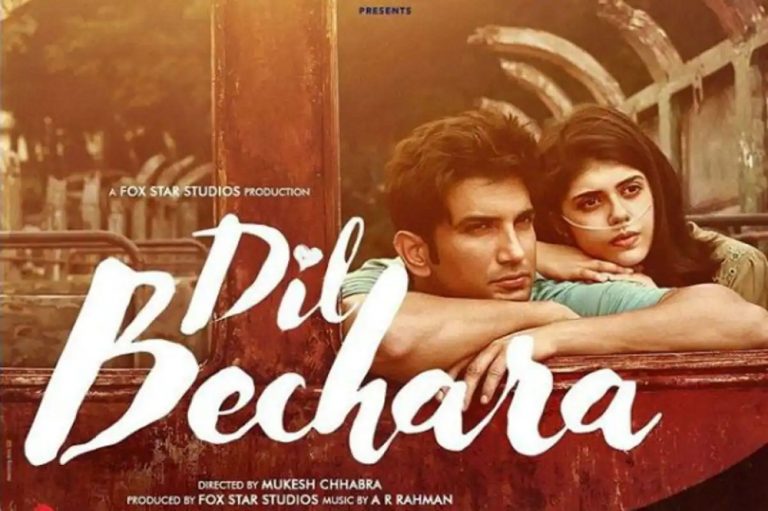 The coming of age drama ‘Dil Bechara’ is a Hindi adaptation of John Green’s novel “The Fault in Our Stars” which is directed by Mukesh Chhabra starring Sushant Singh Rajput, Saif Ali Khan and it’s the debut movie of Sanjana Sanghi. It was earlier titled to be ‘Kizie Aur Manny’. Let us have a look at the details regarding the release and the production of the movie.

A girl named Kizie Basu is narrating the story, who is suffering from thyroid cancer and is in a serious condition where she can lose her life anytime. This makes her avoid any kind of engagement with people. Then she meets Immanuel Rajkumar Junior a.k.a Manny. She tries to distance herself but eventually, they end up bonding over movies and music. Manny is said to have suffered from Osteosarcoma and is currently in remission. They connect with each other and end up falling in love. Kizie asks Manny to visit Paris with her to fulfill her last wish as her health keeps on deteriorating. The story is around this beautiful journey about their relationship and fighting death to live a beautiful life.

Mukesh Chhabra announced the launch of this film in October 2017, with A.R. Rehman being the music composer. They cast Sushant Singh Rajput and Sanjana Sanghi giving Sony Music India the music rights. In 2018, Mukesh Chhabra was accused of sexual harassment and was suspended. But, finally ended up returning which was the cause for the delay of the post-production activities.

The movie shoot began on 9th July 2018 in Jamshedpur. They have also shot some scenes in Paris. The pandemic was the reason for the movie to not hit the theatres and the producers decided to release it on an OTT platform. This movie is the last film of Sushant Singh Rajput who committed suicide on 14th June 2020.

The trailer of ‘Dil Bechara’ was released on 6th July 2020. It has already gained over 73 million in a week. The trailer portrays the protagonists exploring new adventures to feel alive. It is a funny and thrilling story of two people with a tragic twist. You can watch the trailer below.

Jumanji 4: Release Date, Plot, Cast and All You Need To Know

Also Read: The Alienist Season 2: Release Date, Where To Watch and Plot

After being postponed many times, the film is finally set to release on 24th July 2020 on Disney+Hotstar. It will be available to everyone irrespective of subscription. After the demise of Sushant Singh Rajput, this movie has an emotional connection to the audience and people are keen on watching it. The film will surely take us on a ride of emotions and inspire everyone to fall in love and feel alive.