by Amrit Mohanty
in News
0

One of the oldest and longest-running gaming conversations is QuakeCon. It is an event that is attended by many people and during this event, there are some game releases as well that Bethesda does. As all people know this year’s QuakeCon will be streamed online because of the Covid-19 pandemic which has done tremendous damage to the people’s lives and their lifestyle. The event is going beginning very soon and those who will be watching it from their homes will get something from Bethesda.

On 7 August, if someone has a Bethesda.net account and also be watching QuakeCon, those people will be getting the PC version of Quake on the Bethesda launcher for free. This was first reported by a very respected Twitter user named Wario64. But the good news doesn’t stop here as it was said that if QuakeCon hits its first fundraising goal of $10,000 then the viewers will be getting a free copy of Quake II. This event was said to be a digital only event back in the month of June which will be running from 7 August to 9 August. There is a lot of stuff that is going to be revealed there. 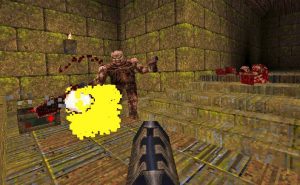 You will be seeing a video games panel which will include a Doom Eternal panel, there will be a panel on the upcoming Dishonored tabletop RPG, and, last but not the least, the grand finals of the Quake World Championship. We might get the details on the new DLC of Doom Eternal, Ghostwire: Tokyo, and Deathloop which will make QuakeCon even more interesting.

These two games are been anticipated by many people most of all Ghostwire: Tokyo which is game development by the godfather of survival horror, Shinji Mikami whose most recent game was Evil Within 2 that was received well by fans and critics alike. The gameplay trailer for the game was pretty interesting and is a very interesting concept which is my people love Mr. Mikami’s games.

Amrit Mohanty is a 25-year tech enthusiast who is an engineer by profession. He loves playing video games and watching anime. Amrit covers everything from Upcoming Game, Development in Tech, and Anime. He is friendly and reliable, You can contact him at [email protected]