A new video leaked by Australian retailer Harvey Norman suggests that the earbuds may launch soon as the Bose QuietComfort Earbuds. As Bose has been working on new noise-canceling earbuds we know for a while that these were previously known as noise Cancelling Earbuds 700. The company gave up on QuietComfort branding when they replaced it with QuietComfort II headphones with noise Cancellation Headphones 700. We thought that company gave up on the brand but the leaked video is saying otherwise, it is expected that the company is going to make a comeback by re-introducing its brand.

Noise Cancelling Earbuds 700 will be released the Bose QuietComfort Earbuds as pe the leaked video suggests, which was posted by erroneously by retailer Harvey Norman for a brief period and was later removed. This video was spotted on Vimeo by CNET first. Of course, Bose’s bigger competition right now is Apple and the AirPods Pro, plus other rivals like Sony’s WF1000XM3 earbuds.

The Bose Noise Cancelling Earbuds 700 at the Bose Noise Cancelling Headphones 700 should have launched last year as we recall Bose had announced that it was under development. But presumably because of the pandemic, there have reportedly been many delays and these earbuds are now expected to launch sometime soon this year. The company has a lot riding on the QuietComfort Earbuds if it wants to reestablish itself as the leader in this space. 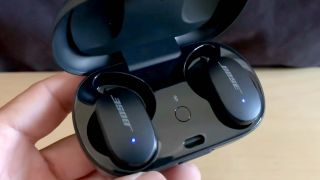 The Bose QuietComfort Earbuds or the Noise Cancelling Earbuds 700, or whatever these end up being called, as far as design goes it is expected to have a pill-shaped design with the Bose logo sits at the back with a white color option modeled as it shows in the video. The QuietComfort Earbuds will include the company’s StayHear Max tips (with an integrated stability arc) and are confirmed to be sweat and water-resistant. These earbuds will likely be priced somewhere near that of the Apple AirPods Pro.

Bose hasn’t released a pair of truly wireless earbuds since the SoundSport Free in 2017, but with the introduction of the Bose QuietComfort Earbuds aka Noise Cancelling Earbuds 700, it seems the company is about to make up for the lost time. The company looks to offer a much-needed variety to buyers, alongside offering some real competition to Apple as The QuietComfort Earbuds will offer “the world’s most effective noise-canceling” backed by crisp audio with deep bass, thanks to “breakthrough acoustic innovations.”