Today we will discuss Union Cabinet Minister Smriti Irani tested COVID positive and shares a hilarious post on her official Instagram handle. The former television actress has got no chill while being caught by the fatal virus. Through a tweet on Wednesday, Smriti informed people about her testing positive and advised them to get checked if they have been in contact with her for the last few days. Announcing it on a social media handle, she dropped a post, which made us have a good laugh.

As many of you might know, Smriti Irani is a Union Cabinet Minister handling Textiles and Women and Child Development areas. Joining the list of politicians and other senate members, Smriti Irani has tested Covid-19 positive. Previously, Amit Shah was admitted at AIIMS for testing positive, Vice President Naidu, and Late President Pranab Mukherjee. 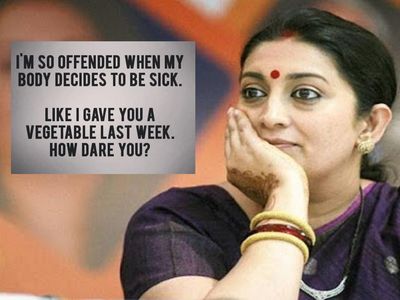 Her post read, “I am so offended when my body decides to be sick. Like I gave you vegetables last week. How dare you?” While adding to her post, she added hashtags like #covid, #dogazdoori, and #maskaizaroori. Thus, through these hashtags, we can understand her strong power while applying a sense of humor. Despite being a Covid’s victim, she has kept her soul spirits high. Earlier, while weighing her body mass, she said, “Although the human body is roughly 60%…I’m not fat. I’m just flooded.” Being a former successful television actress, friends of television displayed their concerns and wished her for a speedy recovery. Anita Hassanandani, Karishma Tanna, Aashka Goradia, Rohit Reddy, and Mandira Bedi were some of the well-wishers on the list. Whereas, glorious Neena Gupta also took her official handle to wish Smriti.

It is rare for me to search for words while making an announcement; hence here’s me keeping it simple — I’ve tested positive for #COVID and would request those who came in contact with me to get themselves tested at the earliest 🙏

However, earlier, while sharing information on Twitter, she clearly advises people to get them checked. As she kept her announcement simple and short, we can safely safe she is not a woman of decorative words. She talks about her body’s betrayal as the minute she starts eating vegetables, she gets caught by this deadly virus. And frankly, we cannot agree more. No one likes sitting like a couch potato when one is an active individual or suitably who just started to have veggies.

Eventually, as soon as the word spread, wishes and prayers flooded in the comment sections. The hilarious post received 25000 likes, and wishes were received. While many users wished for her recovery, it seemed she might have developed a separate fan-base for her quirkiness. A user wrote, “We want leaders such as you. One positive side of this unfortunate situation is that you will get a while to get yourself calm and collected.” However, this is not the first time; Irani has applied a humorous tone for her social media handles. Being a woman of today and being exposed to various challenges, she herself participated in some of them.

The 44-year-old Union Cabinet Minister exhibits the qualities of true leadership and flawlessly battles against this dreadful virus. At last, we can only hope for her speedy recovery so she can successfully resume her work.

Mumbai: Three Arrested for Betting on Matches between CSK and KKR in IPL 2020

I'm Srishti Mathur, an English Major student. Here, I'm sharing my views on different topics that may interest you through my writing skills while sipping tea and craving for coffee at the same time. You can reach me out at [email protected]3.123

Mumbai: Three Arrested for Betting on Matches between CSK and KKR in IPL 2020