Today we are going to talk about Hindu Rao nurses who have decided to go on a strike considering their salary dues. From March, the health mask warriors, including doctors, nurses, and the other hospital staff, are fighting day and night to combat this coronavirus. To provide relief and medical support, the hospital staff is working to meet their ends. Unfortunately, doctors, nurses, and the whole team are fighting hard to survive as the government has become shielded from the complaints. As a result, the MCD governed Hindu Rao Hospital has reportedly put a hold on their salary status. Furious and helpless nurses with clerical staff have decided to initiate a strike against the government and its norm, with a hope in heart to clear their dues. However, it is unfair to hold someone’s hard-earned money, especially in these deadly times.

Reportedly, hundreds of nurses at the Hindu Rao Hospital tagged along with nurses of North Corporation-run facilities have decided to take the fight on the streets. With a motive to make the government aware of their “pending status,” they have tried their best to make their voices heard in salaries. The strike is led by the Nurses Welfare Association (NWA), which is considered the largest governing body fighting and preserving the rights of nurses. Initially, the doctors called off their protest when North Delhi Municipal Corporation released a statement regarding the release of their salaries for September. 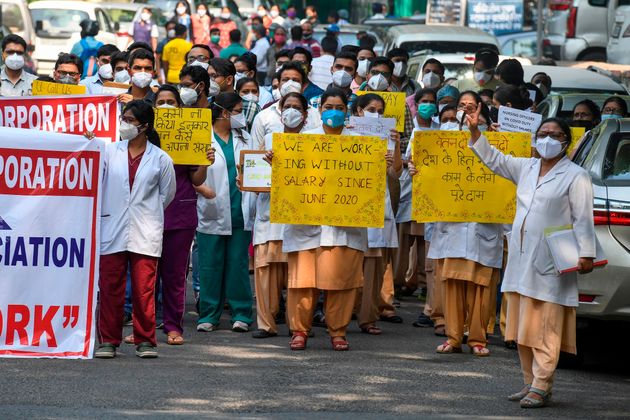 Considering the plight of nurses, the association has written a letter to Jai Prakash, North Delhi Mayor, to intervene in the matter. The nurses alleged that the salary was due from June 2020 and stated the strike to begin by November 2. As the nurses were not heard despite repeated calling for help, their tolerance touched the impatience mark. Indumati Jamwal, head of the NWA, talked about their helplessness and said, “We had no option left other than going for a strike.” Adding further, “We have already worked for few months for the betterment of the patients. Unfortunately, it is affecting our household.” Inspired by this strike, the nurses of Kasturba Hospital have also joined the strike as the suffering is the same. As united voices are heard with much greater compassion and seriousness, the nurses have pledged to make this a real success. Thus, to make the government and its bodies aware of the conflict that lies between the government and its corona warriors, the strike was the best option they could afford.

With the number in mind, 650 determined nurses are on strike for their pending salaries. Jamwal wished that the strike doesn’t continue for months, and their concerns can be addressed by the earliest. As the spread of the virus is bringing new cases every day, we can only hope the government will release their salaries soon. Earlier, Resident Doctors’ Association (RDA) members protested for days and with the plea of releasing their three months pending salaries. Additionally, senior doctors of various hospitals were united to protest against the government for the salary issues. As no new revelations and promises were made, the strike was called off eventually.